Ender 3v2 with a Bondtech DDX and a Slice Mosquito.

After a bit of an incident with some black PETG and the hard discovery that some PETG formulations will work with a PTFE-tube hotend but not others, I resorted to a printer upgrade. I figured it would be a relatively fast upgrade but it turned out that my printer was either fully out of commission or really unreliable for several weeks, which was not how I’d planned things.

SiliCon 2021, Crafty Sorceress and the flash grid of doom

The story starts with meeting up with Crafty Sorceress at SiliCon 2021. The entire reason why I went to the con was to see the new version of her LED lightsaber.

As part of this, I got some really neat flash shots that were completely within my style of photography but they were just… better. And so I resolved to find some stuff to up my portable lighting game.

Thus, I started looking into what I could do that would fit into my usual photo backpack that would add some flair to my lighting. One of the parts identified was a really nice photo grid that was designed for a Canon 580 but would probably fit my flash.

In order to do that, I decided I should be printing with black PETG, because the flash can get hot and PLA might not be the best of options… so I got a roll of Matter Hackers BUILD PETG in black… but then I discovered that it wasn’t printing right.

My non-all-metal PTFE-tube hot-end is really only good up to 240 by what I’d read on the Internet and that was fine for clear PETG but not black PETG.

The upgrade treadmill for Ender printers

I decided that I wanted to avoid the whole treadmill where a person buys a mildly improved piece of the puzzle, then a little better one, then a still better one, and eventually you have a pile of parts, each one a mild improvement, and get to the part you actually should have gotten in the first place.

I figured that if I just went to a clone-ish hot-end I’d end up with problems. One of the things that happens when you go to an all-metal hot-end is that the heat creep increases so you need to reduce the retraction rate in order to avoid jams… except that means that stringing increases as well, because everything’s connected.

So I figured I might as well make it more Prusa i3-like and go to direct drive at the same time, figuring that the reduction in retraction distance from direct drive would offset things.

The Bondtech DDX comes in a nice pretty package for an Ender. That was a bit of a plus. They also are one of the better name-brands.

I was kinda wondering what the benefits of different hot-ends was and decided that, since I was going to get a hot-end anyway, I might as well go for the Mosquito hot end because, allegedly, it’s going to have less heat creep and also has the advantage of being sturdier to make nozzle changes easier.

I already had an upgraded 50W heater that I’d picked up so I’d have a spare, so I didn’t get yet another heater, and I figured I’d scavenge the thermistor from my existing printer, so I went to the Slice Engineering site and used their nifty configurator engine to get a DDX extruder, the adapter and the Mosquito, plus a 0.4mm and 0.6mm vanadium nozzle.

A bunch of things that went wrong and ate up time

This is yet another symptom of one of the worst things about the 3D printer industry: Leaning on the community for free videos. For example, when I set up my Ender 3v2 in the first place, I needed to find a video because the manual wasn’t great, but that’s par for the course. [sighs in Ender] Having a fancy upgrade hotend and being in the same boat… not so good.

If I were to actually propose a solution, instead of griping, is that there needs to be a “general principles” meta-guide alongside the printer-specific guide, with things like a good exploded view with the parts called out with pointers for orienting and adjusting them right would be good, for example.

The correct BLTouch mount didn’t come out until after I needed it.

The entire time, Bondtech partnered with Slice Engineering such that I could go to the Mosquito store, select my printer, and get the suggested upgrade kit.

The DDX extruder has enough room for the Ender 3v2’s BLTouch bracket to live along side of it and the instructions suggest it’ll just work. However, it doesn’t just work, which seems to be specific to the Mosquito… however I purchased it from the Slice Engineering store. Thus I crashed my nozzle into the bed when I tried to use it.

I had printed the provided BLTouch adapter already, just in case it didn’t fit, so I tried that. At this point, there was only one provided BLTouch mount, the “DDX Universal BL Touch Mount” filename 10079-60_DDX_BL_Touch_Mount_Universal.STL. Except that’s not universal because I guess if I wasn’t using the Mosquito, I’d be able to use both screwholes on the DDX so that it’s actually maybe a stable mount, albeit one that’s still fiddly.

Thus, every so often I’d have to do a total re-calibration of things because the BLTouch had moved and when I did so, I’d also have to be super careful because it was only held on by one screw anyway.

After a while, I get curious and randomly look at the Bondtech website and lo and behold there’s a new BLTouch mount, the “DDX BLTouch Mount CR-10S Pro/V2/Max & Mosquito”, filename 10079-61_DDX_BLTouch_Mount_for_ProMosquito.STL. No Ender in the name, of course, but that one’s actually at least vaguely right.

So, while the folks at BondTech had the opportunity to design their own BLTouch mount however the heck they wanted and aren’t even including it in the box, it’s actually a pretty crappy way to mount BLTouch sensors.

I’d procured a 5015 blower from th3d with the intention that at least some point, I’d install that. I figured it had the dual benefits of probably blowing the same amount of air as the prior blower with less noise as well as blowing more air for better cooling.

I had printed, before I started, a bracket for the 5015 fan that someone designed because, at that point in time, BondTech didn’t have a V3 version of a 5015 fan.

I’d also procured a much quieter 4020 hot-end cooling fan which I’d intended to install for a while but never really got around to it, but it’s actually a bit too powerful for the Mosquito’s needs. However, I was forced to install it anyway because it turns out that you really really need a cover in front of the hot-end cooling fan, which I learned by breaking most of the blades.

I ended up designing my own silly little fan cover. Pretty much everybody’s fan covers looked cool but were more mesh-like which meant that they made the quiet fan loud by creating turbulence in the air stream. There were a few promising looking ducts but they ended up blocking the screw holes.

There wasn’t a sock available at the time I purchased it, so I ran it without the sock, which wasn’t exactly optimal because the hot-end cooling fan that’s specced to be as good as the stock 4010 fan but quieter blows a decent amount of air and so it kept causing the thermal overload protection to kick in.

Which is fine until I got frustrated about the whole thing and put a piece of gaffer’s tape over the fan cover which worked until I managed to clog up the heatbreak tube and had to do that whole blob of maintenance.

I’d also picked up a Partsbuilt 3D silicone sock but didn’t install it until I screwed up my first heatbreak tube because it seems to be designed to go over the whole works, which meant that unless I cut away at it, I had to remove the heater and thermistor to put it on so after that excursion, I ended up just cutting away at the sock and that solved a bunch of problems.

I printed the flash grid of doom from my stock of black PETG! 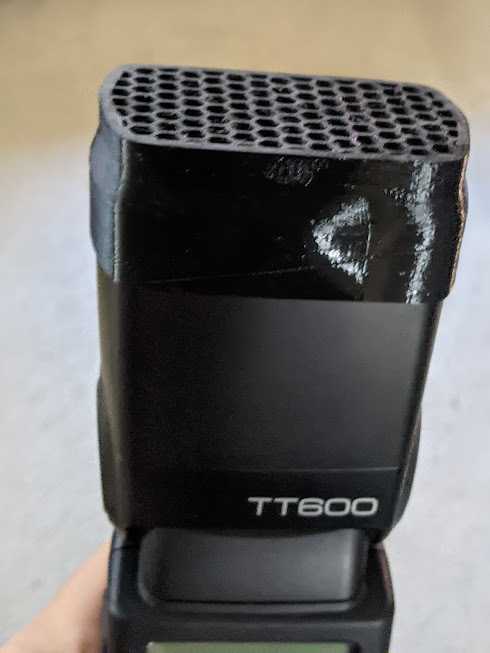 Then I printed it out of Nylon. Except the nylon isn’t opaque enough so it doesn’t work.