I started out without a drybox or dehydrator with my printer. I got one roll of PLA and one roll of PETG and I figured that I’d use my time on the PLA roll to determine what I was going to do with the PETG roll.

About two weeks in, I’d used maybe half of the spool of PET so I decided that it was unlikely that I’d use up a complete roll of PETG with it in the open air without it getting at least a little bit wet, thus, it was probably a good idea to get a proper drybox.

The 3D printer community has really gone wild on this particular problem. Because of the RepRap origins of the modern 3D printer community, there’s a wealth of do-it-yourself options out there. Even Prusa, who exists to sell you products, decided it was better to help you print your own drybox instead of selling a branded product.

If you want a drybox, you can:

The downside of the 3D printer community making so many good DiY dryboxes is that all of the commercial dryboxes are either expensive or have lots of questionable reviews, so not buying a pre-made one seemed like a good idea.

I decided that printing was going to end up being too much trouble. The Prusa one was kinda appealing if it was going to fit on my bed but printing all of the little pieces looked like way too much work.

Since I’m not really doing anything with multi-materials right now, the Samla or Sterilite boxes as something to print out didn’t seem useful.

I decided that the 21 cup Rubbermaid box was the best option to print out of, so I got started on that first.

I then realized that I was going to be storing at least some number of spools, so I also went down the road of using a 20 quart Sterilite container with a gasket as a storage box, which means that I didn’t need to drill any holes in it.

🎶To all the people out there with printers to impress

Two - put your junk in that box

Three - you can print from that box

And that’s the way you do it🎶

(With apologies to Lonely Island)

The way I figure it, a ball bearing is going to be required so that the extruder doesn’t get overworked pulling the filament out. There’s some notion that humid air is going to float to the top, so you probably want something that fits against the bottom so you can put a desiccant holder on top. And, overall, it seemed a bit excessive to get one that required a lot of parts.

I ended up picking out Spool Skate because it didn’t require any parts other than 4 standard 608 rollerblade bearings and was really beautifully simple.

I printed it once in PLA because I hadn’t opened the PETG yet and then I decided, since it was designed for PETG, I’d re-print it but mostly the difference is that the PETG version didn’t require scraping with a knife to get things shrunken.

I found one particular drybox tap with PC4-M6 fittings that seemed suitable and had Amazon links for the required non-printable parts.

I didn’t have the right drill bit, but I also didn’t feel like buying more drill bits for a one-off project, so I just used my largest drill bit to cut the hole in the box and then enlarged it with a dremel.

I did print the version with an O-ring just because.

Picking a desiccant holder (Or, in my case, holders)

One nice-looking one that’s an exciting design is the super-fast printing woven wall holder that’s designed to fit inside of the roll. So, armed with my first thing of desiccant, I decided to just make one of those real quick.

I also got a pair of the round hydrometers that everybody seems to use and put one in the lid of that, so I can keep track of things.

One thing I realized myself semi-independently but this really drives home is that there’s a certain design methodology that you should use for designing for print. When you try to make something with holes in it, you end up spending a lot of time with the printer stopping, retracting, then moving, then extruding again. Wiggles and corrugation and weaving are great, it’s just a little annoying sometimes to deal with the meshes.

After printing the port, the desiccant holder, and the spool skate, I was good to go for the Rubbermaid box that I was printing from, so I was comfortable opening the PETG bag and trying out PETG.

However, I discovered that a Sterilite box took quite a while to dry out whenever I opened it with a single full-sized version of the woven-wall container, so I started printing more holders.

I picked out a long snap-together box that turned out to be a torture test on my printer because of all of the slots as a bin that would hold a lot more desiccant. That holds a lot more material in a single print.

Finally, I’d spotted a larger project for a 21 cup Rubbermaid that had a desiccant holder that I really liked that would hold it towards the lid (because, as I said, apparently humid air rises) and also means that the extruder isn’t trying to spin it when it pulls out the filament, so I printed that. Which did require a bunch of extra parts like M3 screws and heat-set inserts.

I didn’t bother printing the spool skate or the other parts, however.

How much desiccant is enough?

I found that if you open the lid with a sensor in there and it takes a while for the humidity to go away, maybe you need more desiccant.

I got a 1.2 lb bag which is probably enough for my needs right now, although in retrospect I should have gotten more like 2 lbs. 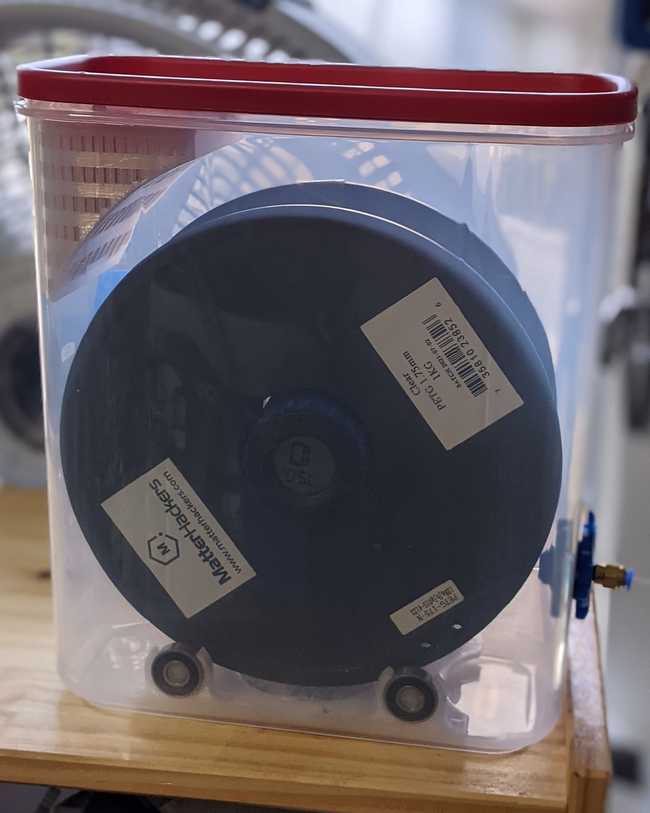 So far, the setup seems to keep things dry enough so that I don’t need to get a dehydrator to really dry the works out.