The missing bits for how to make a QMK macro pad from scratch: Writing a firmware for a custom board

At some point, I was linked to Ruiqi Mao’s guide on how to make a keyboard PCB in KiCad and kinda filed in the back of my head the idea of doing that. Because, honestly, PCB design is kinda fun.

Eventually, I decided there were enough interesting reasons all coupled to making a ATMega32u4 board that I might as well sit down and make a development board for that chip that was also able to be a QMK keyboard that I should devote some design time to the problem. 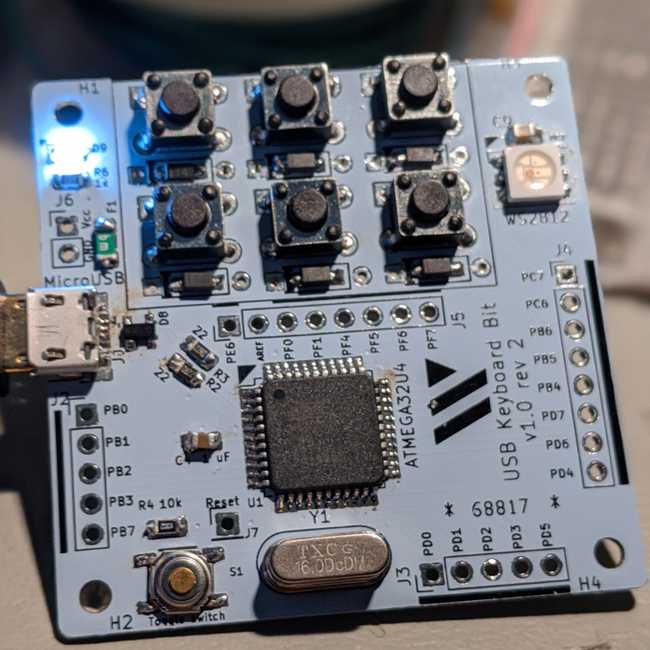 But first, a warning:

I’m writing this slipshod because I could not find anybody who wrote any version of it at all. This ought to be an actual proper reasonable step-by-step guide.

If you are making a keyboard, why make a PCB using KiCAD?

First, Ruiqi Mao’s guide is old and has issues and has been unmaintained, although none of the issues actually caused me trouble in my design because I was ignoring those bits anyway.

If you want that guide, but more up-to-date, the ai03 guide is actually fairly current.

Second, DigiKey’s KiCad footprint library is dangerously out of date and caused me to have to make a second rev because they knowingly left broken footprints in their repo.

I have a few differences of opinion with the build process from the more modern ai03 guide:

Unlike many microcontrollers, the ATMega32u4 comes with a bootloader

If you like to live dangerously, you can design a keyboard PCB in KiCAD or another tool, purchase a ATMega32u4, solder it down, and program it with QMK without owning any sort of developer cable or device programmer.

For many microcontroller designs, you need to have a developer kit of some sort with an overpriced cable to put some firmware in place. You can still program an ATMega32U4 via the ISP port just like any other AVR microcontroller if you want, but they left a completely reasonable DFU bootloader there.

I don’t understand why this isn’t the default for all microcontrollers. This is something only the hardware-oriented hardware companies seem to think is a good idea.

I haven’t yet had the time to try this trick with the larger Arduino environment, so I’m not sure if this applies there as well.

A vague outline of how to create a new QMK keyboard.

It’s universally a jerk move to say something is “easy” or “simple,” even though a lot of software engineers have been doing it. I’m not going to do that. Nothing is easy or simple.

Even though there’s not really a good step-by-step guide to how to set up a completely new keyboard in QMK, QMK was the least of all annoyances in my quest to go from a decent hobbyist understanding of understanding of PCB design in KiCAD to a functioning UCB keyboard.

Furthermore, with the help of the two guides, plus some earlier time reading the Arduino From Scratch series and the DIY Arduino Checklist, I would have even gotten it right on the first try had the DigiKey KiCAD library not steered me wrong.