Trying out Ponoko and the FreeCAD Laser Cut Interlocking workbench

tl;dr: The Laser Cut Interlocking workbench is the first tool I’ve found that feels like it might make the process of designing three dimensional structures to be laser cut easier. And Ponoko is kinda neat once you get past the $14 per-order charge

Why is laser cutting cool?

I should probably expound upon this even further at some point, but I’d just like to highlight that there’s a few things where you can upload a file to a service and magically, without any need for a long conversation with a sales rep and a back-and-forth process, receive the part you designed in the mail some weeks later.

Now, 3D printing is amazing and revolutionary, but it’s not perfect. Transparent filament is neat, but it’s not really window-clear. The porosity caused by extruding filament means that it’s not quite waterproof. Things like that.

Furthermore, it’s far more energy-efficient to laser-cut a continuous sheet of material than it is to print that material in a printer.

The last time I worked with acrylic, you had the option of either paying a bunch of money for someone to carefully fabricate it for you or fabbing it yourself, frequently at annoying levels of difficulty.

The problem is that it’s kinda like perfect wood that doesn’t warp or have knots that all of your existing woodworking tools can use, except for the part where you need to replace all of the bits and blades with plastic-specific versions and change your speeds and feeds so it’s not at all like perfect wood after all.

On the other hand, it turns out that, of all of the available materials, acrylic also happens to be one of the more magical materials to laser cut.

Why FreeCAD and the Laser Cut Interlocking workbench?

I’ve been using FreeCAD as my 3D CAD tool of choice. It’s not perfect and it’s a bit tricky to really wrap your head around all of the bits when you start out. On the other hand, it’s open source so you aren’t stuck with using the free plan of Fusion 360 and then get caught when Autodesk decides to start charging for the features you were using.

I’ve been hunting for a tool that reduces the hassle of making things that interlock. I found one tool that kinda maybe worked, but since it worked in the 2D domain, while it might have automated the joints, but there was no feedback for what it was going to look like assembled so I never really felt comfortable with the tooling.

I did discover that there’s a workbench for FreeCAD called Laser Cut Interlocking.

It’s a bit clunky, but it’s also an experimental module for an open source tool that I’m not paying for so I’m mostly being happy with what I’m given.

It’s got two major tools. The first makes box edges, the second makes interlocking cross-pieces. So, before I got my heart set on actually using the tool for real projects and then ending up heartbroken when it turns out that nothing fits together, I figured I’d make some simple bits and fab them. 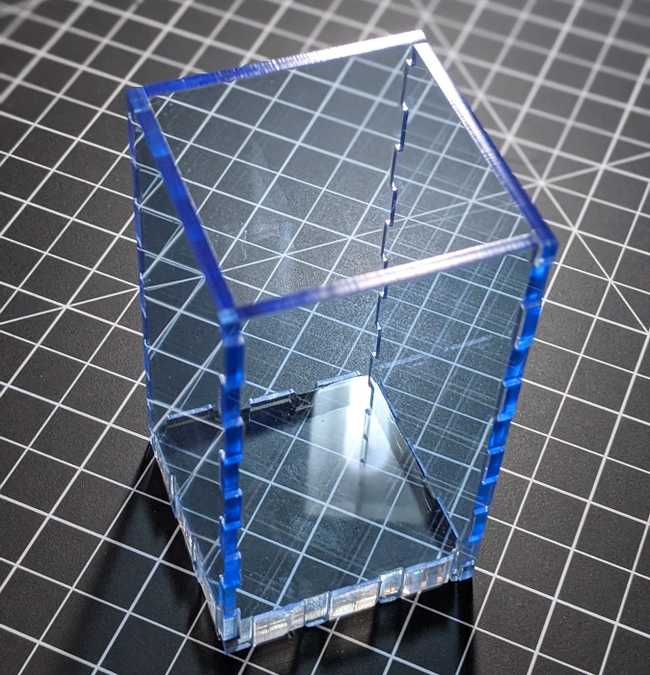 The first thing I tried was making a simple box, 50mm × 50mm × 100mm. In order to make it a bit fancier than the stock example, I decided to make the sides out of 3mm plexiglass and the bottom out of thicker 9mm plexiglass. This meant that I didn’t use it’s own internal box tool and just generated one using the Part workbench.

It’s a bit funky in terms of workflow. This is probably at least partially to do with it being a plugin that the FreeCAD core developers might not have been thinking about. You have to individually tag each of the faces that are joints, but at least there’s a preview for you to make sure that it’s what you expect.

It also doesn’t seem to do non-square angles. A 90 degree angle makes for perfect slots within which things can interlock, whereas if you change that angle, it’s still able to interlock and may still be able to hold itself together.

The way the tool is implemented is that, if you give it non-square geometry, it gives you weird results that are clearly not suitable for laser cutting, which isn’t optimal but, again, this is some person’s amazing experimental recreational project.

It’s also got a bunch of configurable options. It can add nodes, which are little bumps on a joint that will make it easier to fit laser-cut wood together. Or it can add little radiuses that will make laser-cut plastic less likely to crack at the joint.

Once you’ve built the base geometry and created your connections, you can then select the pieces it generates and use the Export tool to get a SVG, although it’s generating far from an optimal nesting layout so you might want to either manually edit it or use one of the laser cut nesting tools.

The only mistake I made was that somehow I’d accidentally set the laser beam diameter too wide for one of the pieces and so I had to sand away 0.2mm of material on each of the tabs. Oops.

However, once I’d sanded down the material, it interlocks perfectly. The default specified tolerance was enough that it was able to hold itself together without glue and you can just get a syringe or squeeze bottle with a needle tip, fill it with any of the popular water-thin acrylic solvent glues, and just flow the solvent in between the joints like magic. 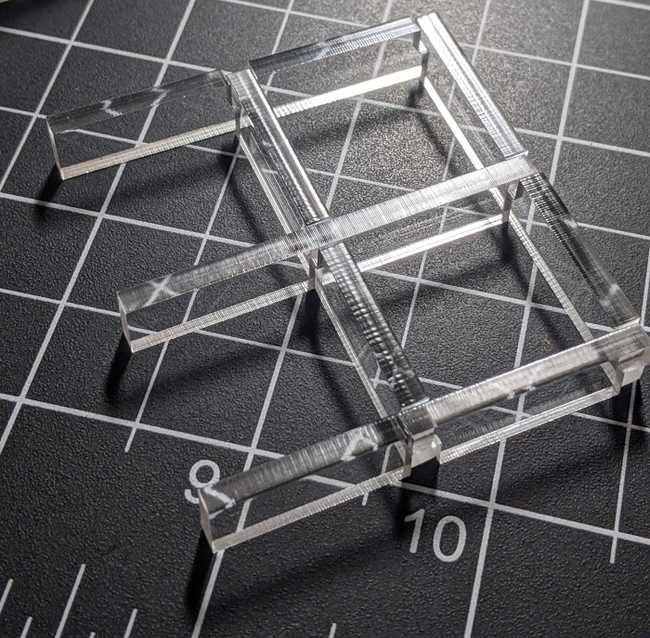 The second thing I tried was using the crosspiece tool. This needs less care, but I didn’t quite grasp the methodology for when to use which tool.

If you just want to make a grid of horizontal and vertical bars, you want to use the crosspiece tool. If you then want that to be a orthogrid support for a flat sheet of material, then you want to use the interlocking tool to connect it to the other sheet.

But, again, everything seems to interlock just fine. It seems to have enough intelligence where, if you feed it a grid, it alternates where the slots are.

I think that the Laser Cut Interlocking tools are worth adding to my toolbox because it feels like, even accounting for time spent figuring out the tool and it’s quirks, it’s saving me time in terms of diligent setup and gives me the ability to actually visualize what it’s doing in ways that prior things I’ve played with did not provide me. Now that I’ve tested the basics all of the way to the physical realm, I’m starting to plot making more complex objects.

This is no diss on this tool in particular, but I feel like there’s plenty of room for better tooling, either by adding features to this one or writing a new tool. 3D printing also has the problem where the optimal structure design for 3D printing isn’t easy to get out of a CAD program because it’s too focused on parts that are easy to mold or mill. 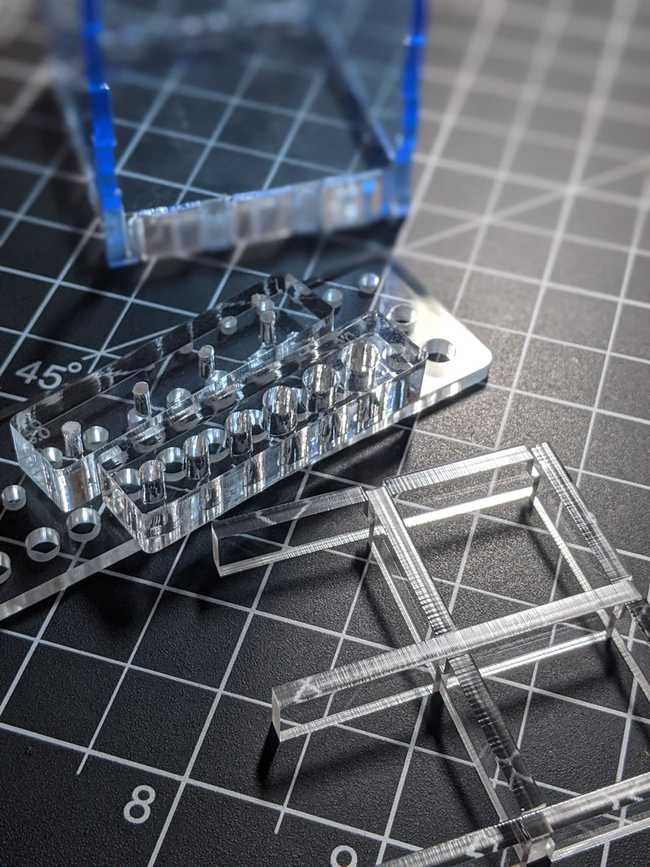 The Ponoko site is reasonable enough to cover the kerf measurements and such so I did feel like they sent me exactly the cutting that I’d requested.

There’s a $14 per-order charge to cover human-related stuff on Ponoko, and then a discount for the material but the algorithm seems a bit “magic” most of the time. Also, you are paying more-or-less for the square area, understanding that there’s some sort of mysterious pricing model involved about the rate at which it’s better to just print a giant sheet versus printing a set of smaller sheets.

I can’t be overly mad about the somewhat opaque pricing model simply because the pricing model of 3D printing is also fairly opaque and it’s still the sort of thing where I can at least upload a file and see what the price looks like instead of having to upload a file for a quote from a human at some point in the future.

Also, because of the per-order charge, it’s helpful to batch multiple prototypes or projects into a single order. It’s also arguably helpful to have stuff that’s useful that you can add to fill space in a design. In my case, I had some plates of my now-standard 5mm × 5mm array of 3mm holes and a hole size guide and a few other pieces.

Either way… when I was pouring over the fab order, I looked at the pieces, especially the 9mm plexiglass, in the light.

The edges of laser cut acrylic are pretty good straight out of the box. They aren’t polished, but they are really quite smooth. I’m sure I could sit down and fastidiously polish everything, but even out-of-the-box, it’s amazing. Opaque and translucent materials are so common in fabrication that sometimes you forget how cool it is to have the light passing through an object.